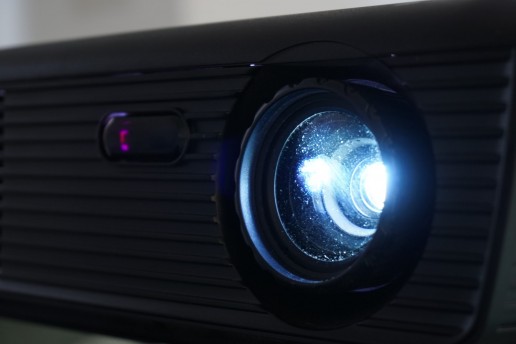 Welcome back to the ongoing blog series, Understanding Projector Technology, brought to you by the team at Experience Audio Video! This week we’re looking at another very important aspect of projector technology: light sources.

The traditional projector light source, the standard lamp is perhaps the most common as well. If you’ve worked with projectors for a few years, you’ve probably seen this type. It’s the most affordable option, and it performs reasonably well.

On the other hand, as far as longevity goes, standard lamps are the worst of the bunch. Under normal operating conditions, standard bulbs in a modern projector usually last between 3,000 and 4,000 hours. This is far better than they could do even a decade ago, but it’s also a far shorter lifespan than the other two types.

The newer kid on the block, LED projector bulbs can last an impressively long time, as much as 20,000 hours. They don’t take up much space or generate nearly as much heat. If you need a quiet-running projector, LED can be a great choice.

Older LED bulbs were limited in color gamut and brightness, but the technology has improved on both fronts.

A word on price: the cheap ones are cheap for a reason and may not last. Quality LED bulbs tend to be more expensive than standard lamps.

Think of laser projection assemblies as LED on steroids. They’re much more expensive and much more powerful. 30,000 lumens isn’t unheard of with laser. With laser projectors, the light source usually never needs replacing.

Laser makes the most sense in very large venues and outdoor spaces. Installing a laser projector in the conference room, then, is probably overkill.

A 2020 Resolution: Upgrade Your Audio

Ah, the new year. Fresh off a holiday season full of too much eating, people everywhere are resolving to do better in 2020. Gyms are filling up — for a month or two, anyways — and fast food drive-thrus are feeling a little lonely.

The team at Experience Audio Video can’t help you with those kinds of resolutions, but we do have a suggestion for you! Why not make a 2020 resolution for your business? This could be the year you finally get around to remodeling that space or upgrading that piece of tech that’s a little long in the tooth.

Our recommendation? Make 2020 the year that you resolve to upgrade your audio systems.

One great reason to consider upgrading your audio systems is the way it can help in communication. Speaking of drive-thrus, we’ve all had the experience of going through one where the speaker was just a disaster. You could barely understand the distorted, tinny voice that was coming through.

If your business involves a large space (perhaps a retail, warehouse or manufacturing floor), you likely have some sort of intercom system in place. (If you don’t, we think you should, by the way! And we can help.)

But what good is an intercom system if subpar audio quality makes it hard for people to understand what’s being said? Upgrading your audio can aid in communication throughout your facility or business.

Second, upgraded audio improves the customer experience. It’s hard to quantify this difference, but you’ve probably felt it before. It’s the difference between visiting a tired chain coffee shop with a run-of-the-mill sound system and enjoying immersive music at a high-end local shop. One is just OK, while the other is truly impressive.

Ready to learn more? Contact us for a free quote. 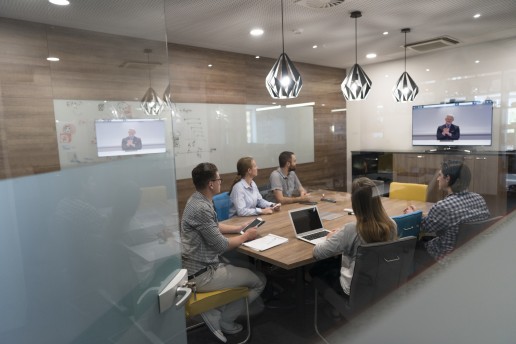 New Office Space? How To Plan Your Audio-Visual System

When you’re building out a new commercial office space, you need to pay attention to things like design, accessibility, and comfort. But one of your primary areas of focus should be planning out the right audio-visual system for your space—now and in the future.

Consider this: it’s easy to add wiring, outlets, and other hidden components now then it will be to have to make holes in walls and reconfigure spaces to accommodate your growing needs.

What do you need to think about when planning your office’s audio-visual setup at a new space?

How will your employees collaborate during the workday? Do you want to provide them with smaller huddle spaces, or will team efforts be done in a conference room? When you know how your employees will need to work together for successful projects, you can plan out AV solutions to support them.

You may not have the money or need for a large-screen video display right now, but you know exactly where it will go in the future. Have your audio-video installation team create recessed areas where the screen can hang, and wires or other AV needs can be stored behind it. Until you’re ready for that screen, put a picture over the area to make it look pleasant in the meantime.

Get Rid Of The Biggest Culprits

It’s crucial that your audio components work during calls and video conferences, but are they optimized to do so in the room they are in? Poor audio quality is an ongoing problem for many office facilities, so what do you need to do to make sure it’s not at yours? Think about how many people regularly participate in your calls, and whether microphones on your conference table may be better than trying to cram six people around a speakerphone.

When designing your AV ahead of time you can also coordinate your other construction needs. Installing sound-reducing panels in conference rooms or better lighting for areas of video conferencing will help make sure that every call runs smoothly and supports your success.

Experience Audio Video has been serving Orange County and Area since 1999 for residential and commercial audio and video installation services. 5 Star Yelp Ratings, Thousands of Referrals, there is not a better choice than Brian Chappell and the Experience Audio Video Team. One phone call and you will know right away the difference in working with Experience Audio Video vs. others in the area. Contact us now at 714-744-4455 or info@eav-inc.com for a Free Consultation.